Another One Bites The Dust 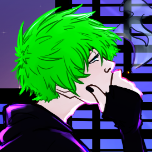 By Vinni.Dragon,
February 23 in Off Topic Discussion