On finding a couple xenobotany genes..

PSA in advance this is a lot of questions. Anything you know would help me a lot!

Okay, so I typically use berries and glowshrooms to find my genes. This is what I get when I'm done.

I know phenomenal can be found from bluespace and other mutations; that's fine.

Here are my problem genes:

Biochemistry:When running all of the fruit of the remaining genes under the plant analyzer, I don't see the additional reagents that the glowshroom would have added if the gene was transferred. Would I need to put the fruit in the grinder to see the change? (Although this doesn't make any sense. Why wouldn't the analyzer just show it? Should I splice something besides the berry?)

Metabolism:According to the wiki, it says "whether the plant requires water or fertilizer. Whether it alters the ambient temperature." This is super similar to diet, which shows how MUCH water and fertilizer plants need! What plants can affect ambient temperature? Is this a mutation? What would it look like under the analyzer to show the change?

I've gotten this from a strange plant before:

The plant uses very little water, and there's an absence of an indication that it would need fertilizer. Is this a deviating metabolism gene? If so, can I just get it from a mutation and not an exotic plant? It's a common misconception that mushrooms do not need water. Or if they do not, the plant analyzer says they do. Mushrooms can find diet genes, but I do not know how they would display a metabolism gene, and if they can, which ones would.

Atmosphere:" The plant's tolerance for changes in temperature and pressure away from its preferred levels." How do I test for this? Does it involve the heating and cooling machines on the temperature-controlled trays? Is there an easier way than that?

It just feels super weird scratching my head at trying to complete the genome. 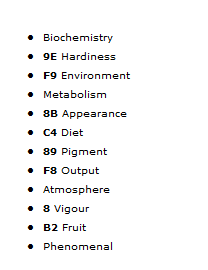 1 answer to this question