A quick guide to not being terrible at Security. 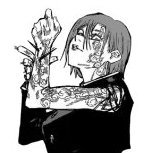