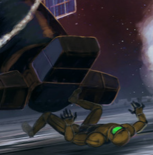 Feedback: A Loadout Refactoring Before It Gets Too Late

By Waff-AI, April 6 in Projects