Mapping out the AI [Feedback Thread] 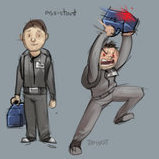 By geeves,
May 8, 2020 in Discontinued Projects

This topic is now closed to further replies.
Followers 0
Go to topic listing
×
×